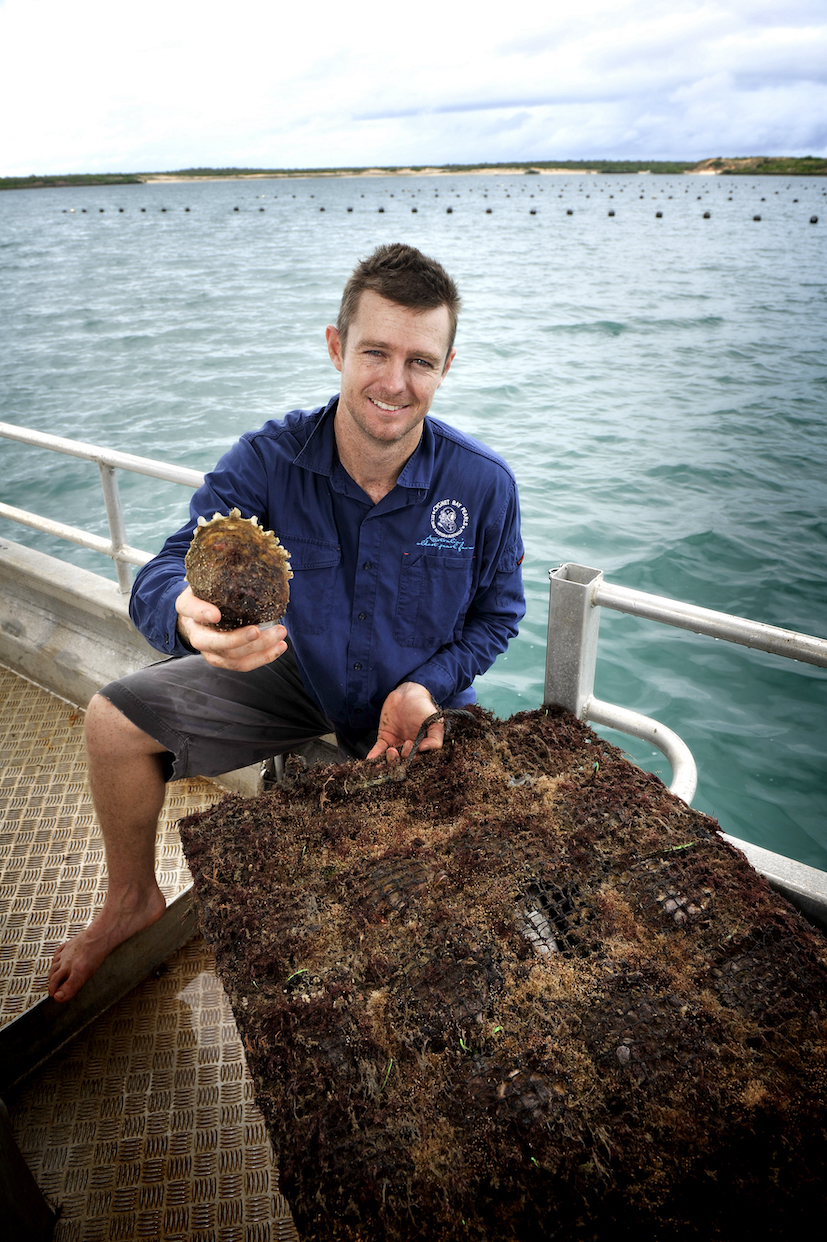 Third-generation pearl farmer, James Brown of Pearls of Australia, is the Kondinin Group and ABC Rural 2020-21 Australian Farmer of the Year. James is also the recipient of the Award for Excellence in Innovation, sponsored by Telstra.

James, together with his family, farm for pearls across two operations: Cygnet Bay, north of Broome, and at the Broken Bay Pearl Farm on the NSW Central Coast.James is a driving force not only within his own farming enterprise which has expanded under his leadership, but also within the Australian pearling industry via his dedication to research and development and advancing Australian pearls as a premium product around the world.“Our family has been pearling since the 1950s and while it hasn’t always been easy, farming is in my blood and to know I can make a difference in the industry, and ensuring it has longevity and stability, means everything to me,” James said.

The award comes after a tumultuous decade for our nation’s pearl industry, which has suffered the effects of an aquatic disease, several natural disasters and COVID-19.

Ben White, General Manager of Research at Kondinin Group, said it was James’ forward-thinking approach to farming and ‘never give up’ attitude that impressed the Judges and secured him with the award wins.“James has a strong family farming legacy behind him but it is clear that he is crafting his own way forward in farming,” Ben said.“Pearling is a valuable agricultural industry in Australia. We commend James on his innovative work ethic and outstanding determination to forge a path for the survival of his business and for the sustainability of the industry as a whole.”

James has a deep passion for the marine environment, studying Marine Biology at James Cook University before returning to the family pearl farm, Cygnet Bay, and taking over the helm in 2000. James has since purchased the majority shareholding of Broken Bay Pearl Farm on the NSW Central Coast, bringing his innovative approach to Australia’s ‘newest’ pearling region located one hour north of Sydney.

It is James’ affinity with the marine environment that has provided him with the knowledge and tools to confront the challenges the pearl industry has faced over the last two decades.“Between 2007-2009, the pearl industry encountered a bio-security challenge in the form of a suspected virus. Over a decade later, we still do not know what the causative agent is, but it is most likely an artefact of significant sea surface temperature increase,” James said.“Add to that the Global Financial Crisis restricting traditional wholesale markets upon which Australian pearl farmers depend, and we witnessed the demise of many pearling companies. The industry was really suffering. To experience production and market failure at the same time was an extremely challenging point in my life.”

James’ approach was inspired. Instead of folding the family farm, he committed to diversifying their operation, prioritised and invested in research, and developed innovative strategies for survival.

“During 2009 we opened up the family farm to not only share our family’s pioneering farming story, but to bring awareness around the ancient connection between Australia’s First Nation people and pearl shell,” James said.“This gave the public an opportunity to experience a fully-operational, commercial pearl farm, meet the many people behind the process, and have the chance to purchase pearls farm-direct. It allowed us to achieve full vertical integration while raising consumer knowledge of the Australian pearling industry and its incredible cultural heritage, as well as increasing tourism in the Kimberley region.“Ultimately, it helped us connect directly with consumers and position Australian pearls as the unique and premium product they are.”

James also introduced a new seafood product to market—the Akoya Pearl Oyster.“We found a niche market with this new pearl oyster, which is incredibly fresh and tender, and it has proved really popular.”

Another key part of James’ sustainability plan was to deepen scientific understanding of the environment in which he operated. Particularly in relation to the major disease outbreak during 2006-2007 which saw mass juvenile pearl oyster mortality syndrome (JPOMS), supressed growth rates of oysters and the eventual reduction in the quality and value of pearl crops.

During 2009 James founded the Kimberley Marine Research Station (KMRS), which is an operational marine science hub for independent research on the Kimberley bioregion. The KMRS facilitates numerous monitoring projects and experiments for various marine species including Kimberley corals and rock oysters.

In addition to the KMRS, James has supported research into the un-named virus that has affected the pearling industry. James has been a major contributor and collaborator in the development of an industry recovery research program involving the Cooperative Research Centre (CRC) involving Cygnet Bay Pearls (WA), Autore Pearling (Northern Territory, formerly Ellies Pearling) and James Cook University.

Dr Ben Gursansky, Head of Rural and Regional Affairs at Telstra, said James’ innovative attitude to farming, and in particular his approach to the bio-security challenges his industry has faced, were incredibly impressive.“James has survived the highs and lows of pearl farming and is now taking his business to a whole new level with his resourceful management,” Dr Gursansky said.

“James demonstrates the importance of diversification and innovation in farming and reminds us how thinking outside the box can not only transform a business but facilitate sustainable change within an entire agricultural sector.”

The strength and fortitude that James has shown in his farming was put to the test during March 2021, with his NSW Broken Bay Pearl Farm suffering considerable damage due to the well-publicised floods.

“Our farm took a serious hit during the March floods, with the force of the water damaging infrastructure and the change in water conditions flowing downstream impacting our oysters,” James said.“But we are optimistic that we can restore the farm and ensure our oysters are in the best environment again. We won’t let it get us down.”

James is the 11th winner of the Kondinin Group and ABC Rural Australian Farmer of the Year award. The annual awards program has been running since 2010 and continues to recognise excellence in farming and farming communities across rural and regional Australia. The 2020-21 Awards are supported by Platinum Sponsor WFI.

For more information on the Awards, please visit www.farmeroftheyear.com.au

For more information on Pearls of Australia, please visit www.pearlsofaustralia.com.au